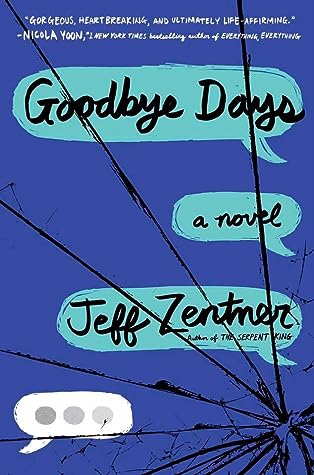 Carver Briggs never got a reply to his text, which he had sent to his best friend Mars.  Mars had been driving home from the movies with their other best friends, Eli and Blake. The police found a half-written response to Carver on Mars’ phone after his car rear-ended a stopped truck, killing the three boys.

Now Carver not only has to spend senior year without this best friends, but with the guilt that has been eating at him.  And it’s not like anyone has made it easier for him… Eli’s twin sister is turning the school against him and Mars’s dad, who is a powerful judge, is trying to get a criminal investigation opened up against Carver to blame him for the death of Mars.

The thing is, Carver blames himself too.

He does have allies though, including Blake’s grandmother, Nana Betsy.  One day, she proposes the idea of a Goodbye Day to remember Blake by sharing their favorite stories of him and giving him a proper goodbye.  After this, Carver begins to reach out to the other families to have “goodbye days” with them as well.

I’m a mess even writing this review… that’s how badly Goodbye Days tore me up.  I can honestly say that this is one of my top reads of the year and right now this book is at the top of my favorites list.  I highly, highly, highly recommend it!

This book gives an honest look at grief, guilt, and consequences, and it shows us how we can heal through the celebration of one’s life instead of focusing on them not being there.  And most importantly, it teaches us to value our time with our loved ones while we are all still here.