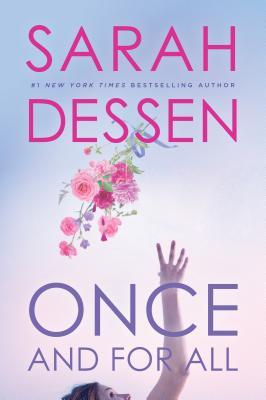 I didn’t like this book as much as I was hoping I would, but I didn’t totally hate it either.

Louna is somewhat cynical when it comes to relationships, but she has her reasons.  Her first real relationship ended tragically, and she works for her mother’s wedding planning company, which means she’s seen wedding of all kinds.  Frankly, it seems like Louna is just sick of love when we first meet her.  That’s not to say she doesn’t believe in it, she just doesn’t feel like she’ll ever have another one like she did.  Enter Ambrose, a serial dater, and her world is flipped when the two make a playful bet about their dating habits (or lack of).

What I didn’t like so much about this book was it just kind of dragged with some of the wedding details for each that Louna worked.  It just got too much where I kind of lost myself and started to think about other things.  Then there’s Louna’s previous relationship with a boy named Ethan.  While I thought the way their relationship ended was a good twist, I didn’t care for the fact the two “fell in love” in only a few hours (including sleeping together on the beach within like two hours of meeting…. what?).  It just seems too far out there for two 16-17 year-olds to have that kind of emotion in only hours of meeting.  Or anyone really.  Call me a cynic, but I’m not a fan of the “falling in love in a day” concept.

For what it’s worth, I did generally like the rest of the story – more so the side characters.  William was pretty funny with his own cynicism and making bets with Louna’s mother on how long each new bride and groom would last.  Then of course I loved Louna’s best friend Jilly and her clan of siblings, even if they weren’t present all that much.

Once and For All wasn’t my favorite Dessen book by far, and compared to the other two I’ve read, it’s actually a bit of a disappointment.  Overall, the book is okay, and while it might not be my cup of tea, it’s probably the perfect read for someone else.