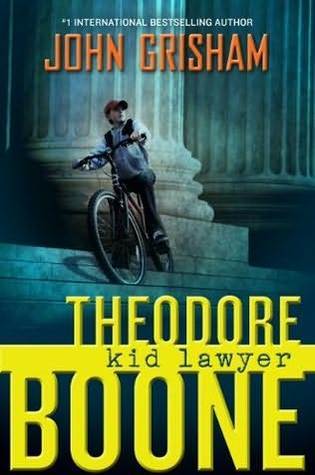 Theodore Boone is the son of two lawyers and go figure, he himself wants to be one.  He spends more time at his parents’ law office and the courtrooms than he does, well, anywhere else.  For a thirteen year old, he knows just as much about the law as the many lawyers and judges in the city of Strattenburg.

When a murder trial is taking place in their court, it becomes all anyone can talk about because it happened right in their small city.  With his interest in law, of course Theo is dying to watch the trial and see the outcome, but instead, he soon finds himself caught in the middle of the trial when an unidentified witness confides in him with what he knows about the murder.  Now Theo has to decide what he should do, risk ousting this witness or watch a cold-blooded murderer walk free?

What I enjoyed about this book is that it makes the legal procedures in some areas of law easy to understand, as this is novel written for the middle grade.  It covers a little of divorce procedures, immigration, foreclosure, and of course, the process of a criminal trial.  This book is a trademark Grisham novel, only for younger readers, or it can even serve as an introduction to his many adult novels.  Either way, if you like legal thrillers and mystery in the middle grade/young adult spectrum, this is a novel you should check out.

The only issue I had with the novel was its ending.  It left me a bit unsatisfied and just feeling “meh” when I realized it was over.

Other than that though, it’s definitely a good book.