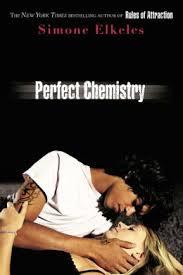 Alex Fuentes makes a bet with another member of his gang involving the school “princess” Brittany Ellis, which ends up leading into the two falling completely for each other.  They learn more about the person underneath the images they put up in school and in the streets, finding out their vulnerabilities and what really makes the other tick.  In the process, they find out they actually have more in common than they realized.

I enjoyed the characters in this book, including Alex and Brittany’s best friends, Paco and Sierra.  Paco was a bit of comic relief and showed that he really cared for his best friend and Sierra was much more understanding than she was made out to be in the beginning of the book.  There was great character development and realism to these characters.  Alex and Brittany really had depth in their characters that you don’t see in the first few chapters, but it’s revealed as you read more into their story.

I wasn’t sure how I’d feel about this book going into it, but I thoroughly enjoyed it and highly recommend it.  It’s not like a lot of the YA romance novels you see today (but also consider it was first published in 2008) and it was quite refreshing to read a raw story like Alex and Brittany’s.