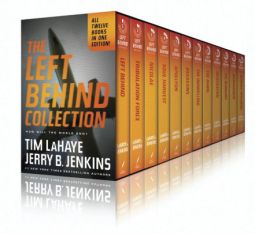 Two authors published a series of books known as Left Behind with their own fictional account of what the Rapture will be like for those left behind when it happens.  Note that we obviously don’t know exactly what will happen when the time comes, this is just their interpretation of the events prophesied in the book of Revelation.  But let me just say, whether you’re a believer or not, this is a can’t-miss series.

SYNOPSIS of Book One (Left Behind) FROM the PUBLISHER:

Panic surges through a Heathrow-bound Boeing 747 as some passengers and crew vanish, along with millions worldwide. Captain Rayford Steele fights to quell hysteria while facing personal tragedy―his wife and son are among the missing. Rumors fly, and fanatics warn about the end of the world. Could they be right? Meanwhile, crack journalist Cameron “Buck” Williams, on the trail of a global financial conspiracy, finds a more ominous story unfolding as storm clouds of good and evil gather.

If that doesn’t capture your interest then… well, I don’t know.

The series follows the characters introduced in book one – Rayford Steele, his daughter Chloe, and a reporter, Cameron “Buck” Williams – and their journey as they realized what has happened to them… Jesus took His children home and they were left behind.  Each of them is eventually lead to Christ as a new generation of believers that will live through the Tribulation period and vow to bring as many other new believers with them as they can.

Throughout the series the main focus is on these three characters, though many new ones are introduced in the books.  There are twists and turns that are unexpected and the story definitely keeps you on your toes all the way up through the final book.  I actually read this series about 2-3 years ago, but I still remember some shocking endings to the books that made me start the next one right away.

What I want to emphasize is that this isn’t a book geared just towards Christians.  While, yes, it’s Christian fiction, I personally feel it could appeal to those who are not because in that case, they’d just read it as they would any other fantasy/sci-fi novel.  This is a real page turning read and I’d hate to see people not give it a chance just because they are not believers.  I mean, either way, it’s interesting to see how people might react when millions suddenly disappear.

One thought on “Left Behind [series] – Review”