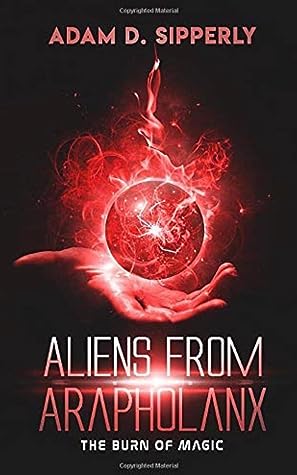 The Burn of Magic is the second in the Aliens From Arapholanx series – a science fiction series about a boy, Patrick, and his adventures after he accidentally stumbles upon an alien base in the woods.  While I was highly anticipating this second novel, I didn’t end up enjoying it quite as much as I had hoped I would.

The pacing of the story seems to be a bit rushed.  It starts out summarizing Patrick’s preparation with a small army to go into space and save other planets from Plutonian conquest, and suddenly just after talking to his parents, he’s on his way.  Unlike the last book, I didn’t feel like I was on the adventure with Patrick.  It was just being told to me.  It might’ve been just me, but I had a harder time seeing the areas that Patrick’s tale took place, whether it was with him on the ships, Venus, and Mercury.

It’s not a bad book at all, I just personally felt like I saw more telling than showing in the narration and there were so many new characters introduced that I found it a little hard to keep up.  However, there were still plenty of sections where I was really into the story and able to follow along better than other times.  It was the inconsistency that threw me while reading this one.

I was also disappointed that there were some events that only made one appearance, like with Patrick’s parents while he’s gone, as well as his old friend Mark.  I realize that might be the author’s intent and that those will be addressed in the next book, but I personally think those should have had some other mention at some point in the story.  But again, I’m not the author.

I can’t say that I wouldn’t recommend this book, because this is just my own personal taste.  The story and series seems to have merit, but I just thought that this book was a little more all over the place than the first book, which felt more adventurous than this did.