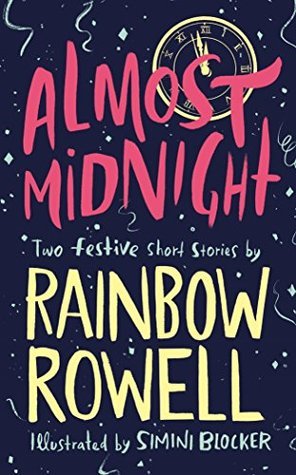 This is a small short story collection of two stories written by Rainbow Rowell.  It features Midnights, which is also seen in My True Love Gave To Me, and then the later published, Kindred Spirits.

Midnights follows Margaret (Mags) over the course of a few years at an annual New Year’s Eve party.  The first one she goes to, she meets Noel, and the two later become best friends.  However, as it is a lot of times with YA stories, Mags ends up falling for Noel, so seeing him kiss another one of their female friends at midnight of each New Year’s Eve party really stings.  Finally, after their first semester of college, she can’t take it anymore and decides to hide out so she doesn’t have to not get kissed by Noel once again.  At least, until he comes looking for her.

Kindred Spirits features Elena, a big Star Wars fan, who gets the courage to camp out a few days ahead of the premiere of Star Wars: The Force Awakens.  However, the line is nothing like she expects.  When she gets there, three days ahead of the premiere, there are only two guys there, one is about her age and the other is possibly a year or two older.  Troy and Gabe are harmless, in fact, Gabe barely speaks to her the first day and a half.  But by the time they enter the movie theater, Gabe and Elena have made a connection, at least on a friendship level.

Both stories were adorable.  I loved all the characters involved – Mags, Noel, Elena, Troy, Gabe.  They all had their quirks and cute moments and were just all around fun to read.  I also enjoyed the illustrations done for this edition of these two stories, they are cute and not at all intrusive to the story.  I would love to see more shorts written by Rainbow Rowell, as she is apparently the master of cuteness when it comes to these little stories.