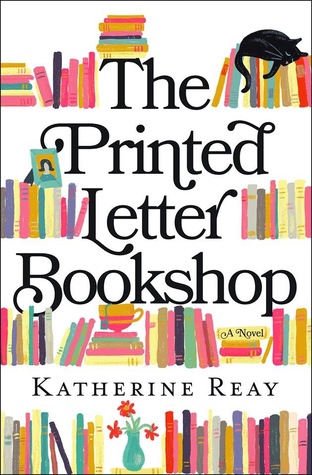 When Madeline was young, she spent some time working in The Printed Letter Bookshop with her aunt Maddie.  Then after a falling out between Aunt Maddie and Madeline’s father, twenty years goes by without the two speaking, and out of loyalty to her father, Madeline doesn’t feel comfortable visiting her aunt when she lives only 40 minutes away.  But when Aunt Maddie passes, Madeline is left everything – Aunt Maddie’s house, car, debt, and The Printed Letter.

However, Madeline really has no interest in keeping the bookshop, especially when she learns it’s not doing so well, despite how much the community of Winsome loves it as well as Aunt Maddie.  She’s also not expecting to win the loyalty of the two bookshop employees, Janet and Claire, due to her plans to sell the store once it gets out of the red.  Plus, both are dealing with issues of their own on top of losing their friend/mentor.

The more time she works in the store, Madeline realizes how incredible of a woman her aunt really was, as well as learning some truths about the feud that separated her from her aunt.  And in the meantime, she forms a bond with both Janet and Claire.  Soon Madeline comes to love the bookshop and the community of Winsome and realizes that sometimes your life doesn’t always go according to your own plans.

This book was a great story of friendship, hope, and forgiveness.  Each of the women found themselves in situations of life they never expected to be in, but then you realize that you’re exactly where you’re supposed to be.  Even when it’s a storm, you’re growing inside as you learn about yourself and if you have the courage to push through.  It was just a very uplifting book and I really enjoyed the characters and community that Reay created.

I also enjoyed Reay’s use of perspective in each character’s points of view, and especially how they were even called out within the characters’ narrations.  It was something that didn’t actually register with me until I flipped to the discussion questions in back, and then I was more aware of how each woman’s story was told.  The interesting thing is that by the end, they all tell the story in first-person present-tense to signify that they’re living in the moment, and I honestly think that was very clever of the author.

A final note on this book is that it is classified as a Christian Fiction book, but don’t let that keep you away from reading it.  It’s not going to preach at you, but it does teach of forgiveness and does include some Bible references that are left in Aunt Maddie’s letters to Madeline, Janet, and Claire.  Honestly, it’s such a good book and I’d hate to see anyone turn away from it because of its genre placement.

Overall, I really enjoyed this one and I also might want to open a bookshop of my own someday!