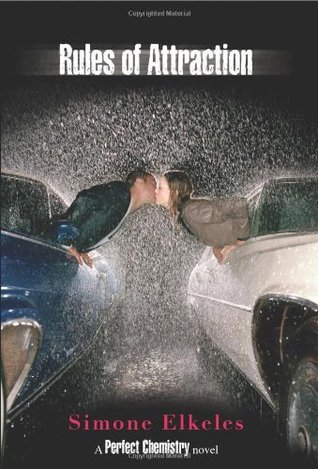 Two years after the events in Perfect Chemistry, we find ourselves following the life of Alex’s younger brother, Carlos. He is sent to live with his older brother in Colorado in order to get his life together, leaving his mother and younger brother in Mexico and the gang life he was getting into. However, the decision wasn’t Carlos’s, it was his mother’s. Carlos wants nothing more than to get back to either Mexico or his old friends in Chicago.

On his first day at his new school, Carlos is paired with Kiara Westford as his peer mentor for the week. Where Carlos is your typical bad-boy, Kiara is your typical good-girl. Though both have more to them than just what’s on the surface. By the end of the first week, there is an obvious connection between the two, which only deepens after Carlos gets into trouble and is ordered to live with Alex’s former professor, Dr. Westford (yep, Kiara’s dad).

Now that the two are spending more time together than before, they’ll be seeing the hidden sides of the other, breaking past their surfaces to deepen their feelings for one another. Though more trouble arises when a ghost from Carlos’s past turns up in Colorado which could jeopardize everything for him.

I really enjoyed Rules of Attraction, just like its predecessor. However I do think I enjoyed Alex and Brittany’s story just a little more, probably because I enjoyed Alex’s character more. He was a little more complex than Carlos, which made him that much more likable. It took me a little more time to warm up to Carlos, but I eventually did and I do love how he was able to have his development throughout the story. Kiara I liked right away because she had different interests that I wasn’t expecting of her and she worked to overcome a stutter – something that usually kept her from interacting too much with her peers.

Overall this book was enjoyable in all aspects. It was witty, romantic, and pulled at the heartstrings a bit. There’s also a few little twists that were like “hmm, I should’ve expected that.” I definitely recommend this one and I can’t wait to read the final Fuentes Brothers book!