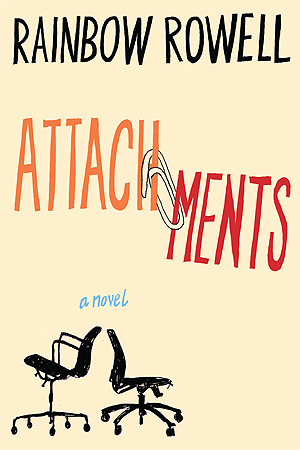 It’s been a while since I read Attachments, but I still get little flashbacks to the characters and story.  That’s how you know a book is good!

In fact, I might be due to re-read the book.

The book promptly opens with one of Beth and Jennifer’s emails, where we see right away that they have no regards to the new system that is flagging their emails at work.  Then we meet the guy who is reading their emails – Lincoln.  This wasn’t exactly what he thought he’d be doing when he applied for the job of the IT Security position at the local newspaper – in fact, it’s kind of creepy sitting alone in an office, reading the emails of the staff.  Soon he finds himself wrapped up in the correspondences between two employees, Beth and Jennifer.  By the time Lincoln realizes he should’ve flagged them, it’s too late.  He’s already read about 4 or 5 exchanges.  He can’t help it though; they’re interesting, smart, and funny girls.  And he is starting to fall for one of them.

This was one of the more cheesy romances I’ve read in a while, and I loved it.  The characters were all great and very realistic.  Lincoln was just adorable at times and he was one of those sweet guys that most girls want to end up with.  He was also unsure of what he really wanted to do with his life, and to fill time he’s been going to school getting multiple graduate degrees.  His struggle with not knowing exactly what he wanted to do was something I could relate to because I’ve been there multiple times before (and I’m sure plenty of other readers have been too).  Beth and Jennifer’s email exchanges were more of the fun parts of the story to read, and had me laughing out loud at times.  It kind of reminded me of how my mom and I exchange emails at times.

Another aspect of the story I loved was the setting.  It takes place in 1999 and goes into the year 2000 and since the characters all work at a newspaper, they have a slight focus on Y2K and if anything will happen like the rest of the world thinks.  There were different references that made me giddy and brought back some old memories – like when she mentioned the Backstreet Boys (who were about to release their Millennium record) and the Pokemon movie.  It was those moments that hit me right in the childhood.  Because I had grown up during that time period it was easy for me to picture the setting more so than someone born in 1999 would be able to if or when they read this book.  Since most of the books I read now are set in more modern times, I really appreciated the late-90s setting of this book.

Though it doesn’t seem to have gotten five-stars all across the board, I can’t help but give it five-stars.  It is such a cute story and the plot was not one that you see all the time, and you can’t help but want to see what happens between these three characters.

Even if other readers don’t love this book as much as I did, I still think it’s worth checking out. The characters are great, the story is well-written, and overall it’s just an easy, fun read.  It’s one of those books where you can actually find yourself relaxing as you read.  If you like a good romance, this is one for you!