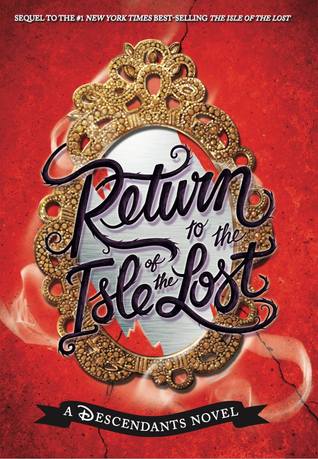 Weeks have passed since Mal defeated her mother, Maleficent (now a tiny lizard), and everything seems peaceful for her and her friends.  However, there have been some weird weather patterns happening throughout the United States of Auradon that cannot be explained, and there have been some mysterious attacks in a nearby kingdom.

Then, there are the messages.

Mal and her friends each receive a message telling them to return to the Isle of the Lost before Saturday night.  They have no idea who sent them this message or why they want them to return, but after some hacking Carlos is able to find out that there is going to be a meeting of the Anti-Heroes club the night they were told to return to the Isle.  Going against their better judgement, the four former villains decide to travel to the Isle to find out what this club might be plotting and to stop them before they disrupt the peace in Auradon.

To my surprise, I did not enjoy this book as much as its predecessor, The Isle of the Lost.  Part of this is due to the fact that the villain kids are lacking the edge they had in the first book and the beginning of the Descendants movie.  I get that they chose good in the movie, but it seems as though their transformation to good was too drastic in such a short time.  Yes, Mal and Jay had a few moments where their bad side showed, but they were still much more tame than the first book.

Aside from that the plot was interesting, since it book took some turns that I wasn’t expecting and it kept me on my toes as I waited for certain events to either happen or not happen.  It was similar to the first book where each of the kids had their own battle to face on the Isle, only this had more of a focus on the new friendship the four now share.

There were some new characters who made small appearances that I liked, including Genie’s daughter, Jordan, and a few more of the villain kids that our old VK’s encounter on their trip home.

I’m still on the fence whether I like this one more than the first book or not, but I do know that I prefer the movies because, well, the music guys… come on. Still, I treat the Descendants books and movies differently because it’s not necessarily a book made into a movie or vice versa.