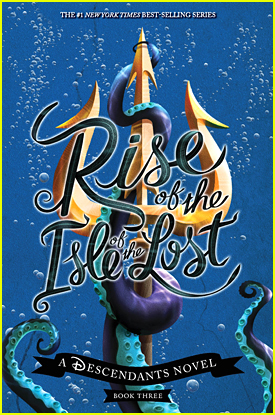 It’s only been a few days since the Core Four found their parents’ talismans and they have yet to destroy them. After a weird storm hits, they decide it’s time to get on with getting rid of them before anything else happens. Though when they’re destroyed, the barrier around the Isle of the Lost is taken down for a brief moment, and though no one notices it, something of great value gets into the Isle and it’s up to the reformed Villain Kids to recover it before it falls into the wrong hands.

So I’ve read this book before, but instead of reading it this time I decided to use one of my Audible credits to get the audiobook version and give it a listen. I know that one of the stars of Descendants, Sofia Carson, is the narrator for all four Descendants novels, and I’m a fan of her music so I figured she’d do a great job narrating the novels. And a great job she did.

It was very easy to invest my brain in the story as I listened to her narrate. She was definitely the perfect candidate for this job – she even captured the tones of her co-stars’ characters perfectly! I have to say that at some times of reading Mal’s dialogue, she imitated Dove Cameron very well!

The story itself was good, and I enjoyed once again getting the backstory of Mal and Uma’s rivalry. There was also some good tension that had me a little worried about the characters (even though I’d knew they’d be fine) while they were recovering the trident and honestly if this wasn’t a Disney middle-grade novel, there would’ve been a different outcome that could’ve possibly had me flipping my lid.

My favorite scenes however had to be between Evie and Doug because they’re my OTP of the entire Descendants franchise. What irks me about the movies is that their relationship is overshadowed by Mal and Ben’s, and I really would’ve loved to see more Devie in the movies because their relationship has the most to be explored given the characters’ family histories. At least the book gave me some good Devie moments.