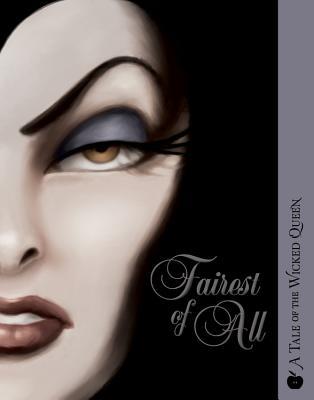 Fairest of All is a great look into a classic Disney fairy-tale from the villain’s point of view. After all, a villain is just a character who’s story hasn’t been told. No one is born a villain; something had to happen along the way to change them. This book shows us what brings The Evil Queen in Snow White and the Seven Dwarfs to the point where she wants Snow White dead.

In the beginning there is no trace of evil in the Queen and she actually has a great relationship with her new husband and step-daughter. Her lady-in-waiting is even her best friend, and she loves this new family of hers dearly. But things begin to take a turn after she’s given a mirror that seems to be magical and soon after loses her husband.

The Queen was a complex human in this book, something we don’t see in the movie, and at the end it made me sad for her fate. You see her slowly fall into the self-absorption and vanity that makes her the wicked villain she is, and when the reasoning for why comes out, it just makes you hurt for her.

This was the second book I’ve read that gives a story to The Evil Queen and how she became evil and this tale is my favorite of the two, though it also makes me more sad. Still, this is a good little book and the story just flows along so quickly that it’s over before you know it! A definite recommendation to anyone who enjoys Disney villains!