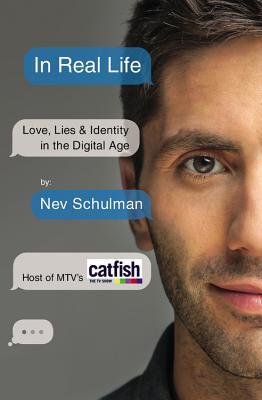 “It used to mean something if someone was your friend.  You didn’t get friend requests.  Someone didn’t askto be your friend.  They just becameyour friend because you spent time with them and showed them that you cared.”

First of all, if you’ve never heard of Nev Schulman or Catfish, let me get you up to speed.  Catfish was a documentary released in 2010 that focused around Nev and his relationship with a girl he met online.  Taking a chance, he went out to Michigan to meet her only to find out she wasn’t who she said she was.  Since then, Nev has gone on to produce Catfish: the TV Show where he helps other people meet who they’ve been talking to online, and let’s say the outcomes can be shocking.

2: a person who sets up a false personal profile on a social networking site for fraudulent or deceptive purposes

When I first picked up this book I thought it was a deeper look into Nev Schulman’s Catfish story, but that’s only a part of it.  Throughout the book Nev gives a breakdown of digital life, whether we’re just using it to keep up with friends or, in some cases, using social media to look for love.  It’s good to keep in mind that Nev is not an expert, but after 5 seasons of his show and experiencing it personally, he does know quite a bit about the concept of forming relationships online as opposed to real life.

Drawing from his Catfish experience and what he’s seen, Nev gives us an inside look as to what can motivate catfish to lie to others online, why people fall for them and how you can avoid being deceived.  While reading you realize the signs of a catfish are pretty obvious, but without knowing for sure, people tend to shrug it off.  It’s not that Nev is lecturing us as if we don’t know this stuff; it’s more like he’s giving us a friendly reminder to keep an extra eye out for those signs.

Fake relationships aside, this book is also about how we should take some of our focus off social media and form friendships the old-school way… in person.  Social media has literally taken over our lives.  If we didn’t post it on Facebook or Twitter, it didn’t happen – that is our mindset these days.  Instead of saying, “Hey, I’ll call you later,” we say, “I’ll Facebook you tonight.”  We’re only worried about getting home to our computers to see what the latest trends are, how many and to talk to a group of people on a fan forum about last night’s episode of The Walking Dead.  People don’t connect anymore, and Nev really brings that to the front of your brain in the duration of this book.

It actually makes you feel ashamed if you’re a social media user.

“Twitter provides us with a wonderful platform to discuss/confront societal problems.  We trend Justin Bieber instead.” – Lauren Leto

I definitely recommend this book to anyone who is connected on social media and is disconnected from the real world.  Again, Nev isn’t trying to lecture us, but he does make some good points in this book that make us take a hard look at how we’re living our lives.  I’ve personally been wanting to spend less time on social media and this book is exactly what I needed to really motivate me to do so.

So get out and play some basketball in the park with your friends, visit your grandma, call your mom.  Just get offline and connect with people in real life; because those are the connections that really matter.

So... I’ve been AWOL on bookstagram for a bit. I’m kinda in a reading/general life rut and have only been able to watch Glee or read Glee fanfiction. I’m trying to pull myself out of it though. But I thought I’d let y’all know that I’m not dead 🙃💜
It’s been probably a week since I finished this book and I can’t stop thinking about it. It was just so good!💜
Currently reading City of Villains while obsessing over Descendants (again😂) 💜💙💚
I know I just started one book, but I might need to also start the sequel of this Clue Mystery trilogy, because In the Hall With the Knife was soooo good!! 😁
Pretty decent haul for March 👀😅
Happy Easter everyone! I hope you all have a great day! #HeIsRisen