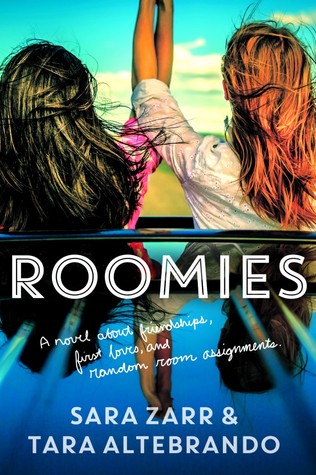 A novel about college, friendships, family, and first romances.

Lauren and Elizabeth have been assigned as roommates for college in the fall, and when given her roommate’s information, Elizabeth (EB) decides to email Lauren from her excitement of going away to college and sharing a room. Lauren, on the other hand, is a little disappointed about having to share a room after asking for a single, but it’s justified, as she’s the oldest of six and shares a room with her two younger sisters. As EB and Lauren continue their back and forth with email, they find a place where they can talk about things that they can’t portray yet to their loved ones, but they quickly learn that email can be a tricky basis for a friendship.

What drew me to the book was the concept of it, especially since I was a commuter and online student at my different schools. If I were in EB and Lauren’s shoes, I’d imagine I’d be excited to meet my roommate as soon as possible as I’m also an only child like EB. At the same time, I related to a lot of what Lauren went through at home as far as not being able to afford new appliances, but also that closeness she had with her parents.

The best part of this story was the girls’ communication via email, and the authors did a great job of portraying how tricky email can be. Just like with texting, you don’t get to see the other person’s facial cues or hear their tone of voice. While sometimes it can be obvious, other times you’re unsure, and you can end up making a big deal out of something that wasn’t, or misread the other person’s intentions. EB and Lauren learn this not too far into their long-distance friendship, and there’s a bit of drama between the two due to some miscommunication.

There was obviously some of that “summer before college” romance going on, though ones that might last a little after the summer (or so it was implied). I didn’t really care for EB’s new relationship with Mark, but I did like Lauren with Keyon because they just had a good chemistry between them. Still, I was glad the romances weren’t the driving part of the book and more of a background story to go along with the real one.

All in all, I did enjoy this book and I think it’s a great read if you’re in the mood for something light-hearted and that reads very easily.

One thought on “Review: Roomies”