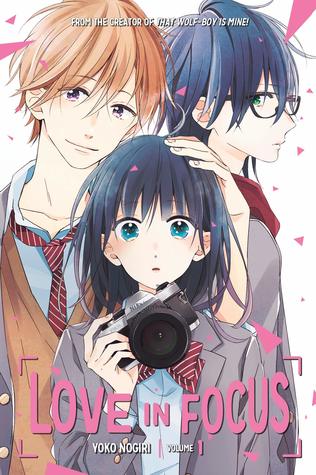 Love in Focus is a short, three volume series that follows a girl named Mako as she starts her first year at a high school that’s outside of her hometown. She was invited to go there by her friend, Kei, who is a year ahead of her, and told her all about the school’s photography club – which is perfect for her as she grew up loving photography. Things get a little muddy when she meets Mitsuru and feels a strange pull to him, but he’d rather keep to himself.

As someone who also loves photography, I immediately liked Mako and her passion for it, especially with the backstory of how her grandfather was her inspiration to get into it in the first place. I pretty much loved all the characters, though I absolutely adored Mitsuru and just wanted to hug him after getting to the part about his past. It’s not tragic or anything, but it’s still kind of sad for a kid his age to be under that pressure. And I have to give Kei and Lucas some love because Kei is the perfect older brother figure and Lucas is just so laid back and chill – I honestly wanted more of his story!

Maybe we can get a manga series of just Lucas?

Obviously by the name, this manga is a romance, and it has a trope of a love triangle, which I’m not fond of, but I don’t hate it either. Thankfully, this actually went in the direction I wanted it to in terms of who won Mako’s affection, and I will just say that the couple is adorable (and pretty obvious when you first start reading that this will be endgame). I think my only issue with the series is that it’s only three volumes because I loved the characters and wanted more of them in my life.

I found Love In Focus by complete chance while I was browsing the manga section at the bookstore the week after it reopened, and boy am I glad I did! I highly recommend to anyone who’s looking for a short, sweet manga to read!

I had blood taken by a vampire today y’all🧛🏻‍♀️
Salty or sugary foods when you read?
My poll ended up a tie, so I decided to go with Somewhere Only We Know since it’s been on my TBR cart longer. I went through the first 100 pages like nothing, and I’m expecting this to be a cute read!
Yay for my 800th post on this account!🥳
2023 has been the year of tea for me. Since getting sick, I’ve had more green tea than ever in my life. I’m not complaining though, now that I’ve found green tea flavors I really enjoy 😋
I opened this book up yesterday not knowing I’d devour it in one day. It kept me turning the pages to find out what happened next!