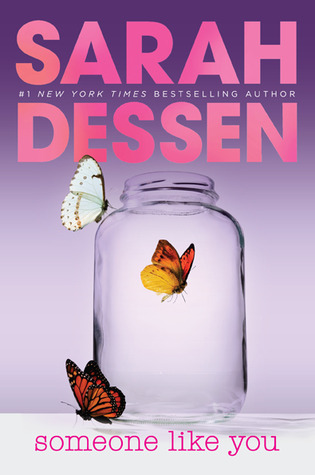 Halley has always been on the sidelines, while her best friend Scarlett is the one who has interesting things happen to her. But what happens when Scarlett’s boyfriend, Michael, is killed in an accident, and she finds out she’s pregnant with his baby? Halley now has to be the stronger of the two and support her best friend through this time of tragedy and uncertainty.

I had high expectations for this book and I was sadly disappointed by it. I mean, the synopsis of the book sounded very interesting to me because it’s about the relationship between two best friends during a hard time. Unfortunately, that seems to only be a minor part of the story because it’s more focused on Halley’s new relationship with Macon, who was the best friend of Scarlett’s deceased boyfriend, as well as Halley’s family and her growing apart from her mother. The friendship between Scarlett and Halley has its cute moments, but it really seemed like it was more of a side-plot than the real drive behind the book.

The parts that do focus on the friendship and Scarlett’s pregnancy were good though. It was raw in showing that Scarlett was scared and Halley was there to support her and back her up when people found out about it. I was just expecting the story to be more about this, rather than Halley’s relationship and rebellion. That, and Macon was just annoying and had no depth to him.

I don’t have much else to say about this book, other than that I did still enjoy Dessen’s writing style (I always do), which is why I finished the book and am not completely disappointed with it. I just felt like there was too much going on for it to have a real story to be following and none of the characters stood out to me. And to be completely honest, I’m mostly disappointed that I was looking to read a good story that really focused on friendship during hard times… this was not the book for that.