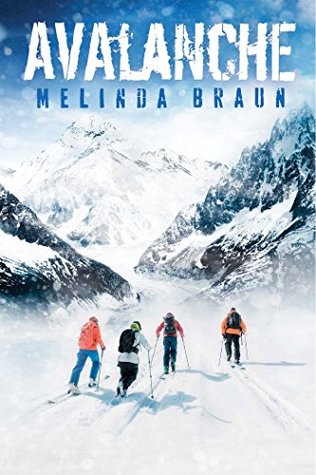 An adventure is what Matt seeks, and an adventure is what he gets. When he and his best friend, Tony, go with Tony’s brother and friends on a back-country skiing adventure they get more than what they asked for. Much more. An unexpected avalanche leaves one of their own missing, another injured, and it’s up to Matt and Leah – who knows the area – to find help before it’s too late.

I did like how this story was written. I was eager to see what would happen next with Matt and his friends, and it was well-paced. It begins with just Matt’s perspective, but then after the Avalanche we get to see Tony’s perspective once Matt and Leah go for help, and we get a few short chapters of “The Hunter” which I thought was clever.

The characters were pretty likeable, and Matt and Leah do get a bit of backstory at least, which adds to the story. The other characters fell a little flat for me though, but it’s also a bit of a short book… so it’s not like there was a lot of time to get attached to them, I suppose. Though I did feel for Tony during the time his group was waiting for help to come. He was just so cute at times and I wanted to jump into the book and hug him.

As I mentioned before, the story kept me wanting to know what would happen next, which I love to have when I’m reading. I didn’t dread going back to read, and I actually read the book in two sittings. That’s not something that happens a lot anymore. The only issue I had was that it felt like the ending was kind of rushed. It was good; it just felt too quick after all that adventure.

Overall, it was a good book about survival and a quick read. I’ll admit that it’s one that I probably won’t reread, it’s more of a “one and done” story. But it’s still a good one.