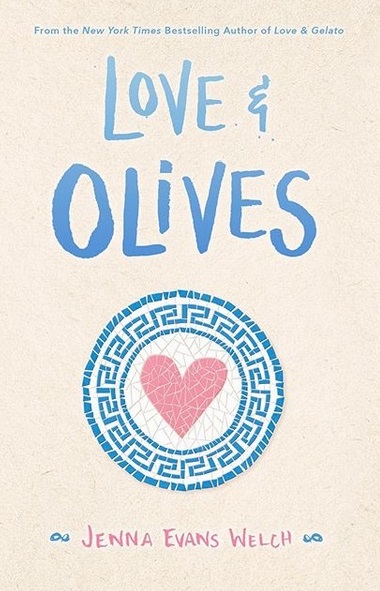 My favorite author has once again pulled off another eventful travel story, this time taking place in Greece!

Liv’s father left when she was eight years old, so she doesn’t have many good memories with him – only the ones where they planned to one day discover the lost city of Atlantis. Now, eight years later, he finally reaches out to her for help with a special project. A project concerning Atlantis. With no choice but to get on a plane to Greece (thanks to her mom), Liv sets out to the land her father grew up in and maybe she’ll find something more meaningful than Atlantis while she’s there.

This book was definitely more of a slow-burn read than the other books by Welch. I was captured right away while reading, but there were a few times that I felt like it was dragging, I guess? It could have been me though, since I’ve been in a weird mood for some time (plus, all the dang moving crap). Still, despite the story slowly building up, it was enjoyable to read. There was a lot of wondering why Liv’s dad left in the first place, and why he was suddenly reaching out now.

As much as I loved Theo as a character and buffer to Liv and her dad, I wasn’t all for the romance in this one. While I didn’t like Liv’s current boyfriend either, as he seemed super controlling, I didn’t feel as though there was a lot of that romantic tension between Liv and Theo. I thought they just were better off as friends. I do commend Welch for keeping her characters in line and not having that whole “cheating” scandal included in her story. It’s one of the reasons she’s one of my favorite authors. She definitely keeps her focus more on the familial relationships and the romances come second.

The last few chapters of the book included information that I felt could have come a little earlier in the story, but still made me tear up and made up for having to wait so long to find it all out. It’s revelation about mental illness definitely could have come in earlier, or there could have at least been more clues to that part of it. I sort of figured out the other reason Liv’s dad kept going to Athens (I’m not giving any spoilers) but I was still surprised somewhat at the specifics.

As I said before, the story is definitely more about Liv and her broken relationship with her father that she now has a chance to fix. It was about loss, love, and forgiveness – things that we deal with all the time and are very real hurts in our world. It was heartwarming in the end, which I love to read, and it wrapped up the story nicely.

Love & Olives is another definite on my recommendation list! If you haven’t already, you should pre-order it! Or pick it up at local bookstore on November 10th!