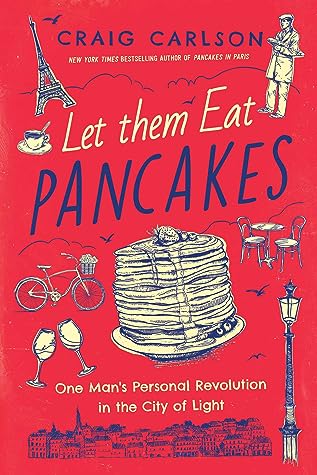 This was an instance where I judged a book by it’s title… and boy am I glad I picked it up! Let Them Eat Pancakes is the second memoir of Craig Carlson, an American man who set off to open the first American diner in Paris!

Carlson’s memoir was heartfelt, sweet, and very informative, as he gives us an insight to how French government works, especially in that of being a business owner. Who knew it was nearly impossible to fire someone in France? Even if they steal from you?! Of course, there are perks too that make you want to live and work in France, like vacation time and healthcare. Carlson portrays the best of America and France, and how the countries could learn from one another.

His story is quite intriguing. He came from a broken family and grew up on the wrong side of the tracks, but instead of letting that kick him down, he got out of Frenchtown and went off to live his dream. Sure, it took him some time to really find out what that dream was, but that’s how it works for a lot of people. In fact, I think it’s because of his childhood that he was able to make something that seemed impossible (because the idea of an American diner in Paris, the culinary capital of the world, is shooting pretty far) and yet, he made it work. So well that he now has two diners in Paris!

I was totally engaged while reading this memoir. The hard lessons he learned about French laws he took in stride and was able to turn them into humorous anecdotes. Learning small things about France was gravy on reading this (as I am a self-proclaimed Francophile) as well as learning that Craig Carlson is from Connecticut of all states! I had no idea he was a fellow Nutmegger when I picked up the book, so learning that someone from my tiny state did something as amazing as owning two American diners in France… that’s just awesome!

So basically, if you love France, pancakes, diners, or just reading memoirs, I highly recommend Let Them Eat Pancakes! Now I have to back-track and read Carlson’s first memoir, Pancakes in Paris!