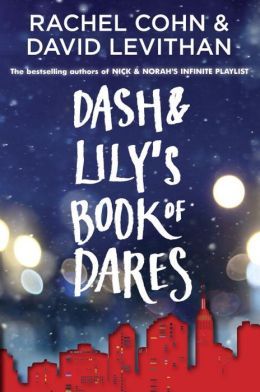 It’s been a few years since my first read of Dash & Lily’s Book of Dares, but I loved it just as much this time around as I did before. This is also following my viewing of the Netflix series, Dash & Lily, so be expecting a book/series comparison coming soon. And spoiler alert, the series is just as cute as the book!

Dash finds a red Moleskin notebook in between some books at The Strand with writing inside giving clues. He takes on the challenge, and soon finds himself writing back and forth with its originator, Lily. While he knows her name, she does not know his – she’s only given a clue as to what it could be and in the meantime calls him Snarl, for his apparently snarly demeanor as described to her by her informants.

What I love about these two is the fact they’re opposite but not. In fact, the only thing they really have in common is that they’re both nerds, which is fine because I loves me a good ‘nerd love’ story. However, when it comes to personality, they couldn’t be more different. Dash is a loner-type personality who happens to have a circle of friends, but really, Boomer is his true best friend. He also does not act or talk like a teenager and sounds more like an old professor; you can see why he’s called ‘snarly’ throughout the book. Still, for a young adult book he could have used less fancy words.

Lily, is a personality type you’d believe to have a lot of friends, however she doesn’t due to an incident that happened in elementary school that made her the ‘weird’ kid. She’s bubbly, nerdy, and adorable with her innocence that in a way, makes me think of Rory Gilmore in the first season of Gilmore girls, only with less sarcasm. She is very loving of her family and is protected by their shelter from the real world, so with her parents and grandfather gone for Christmas this year, she’s able to explore that world a little on her own. Starting with this notebook idea her brother started in order to get her out a little.

The main difference between the two is their take on Christmas; Dash hates it, while Lily loves it. Though you can kind of see a switch between them for a short while. Lily finds out some family news that disheartens her for a time, whereas Dash has found some Christmas cheer in this notebook game he is playing with Lily. Meanwhile, the readers here are all rooting for them to meet and get together.

Their story is just so sweet and innocent, which I really appreciate. While there’s minor drama that occurs (because life is full of it) it’s nothing scandalous that makes you question why these two continue to like each other. In a way I wish there had been more dares to keep the mystery going between the two, but at the same time I can see how it might have gotten tedious after a while.

Either way, this is a cute, quick read that I’d recommend for YA fiction lovers everywhere.