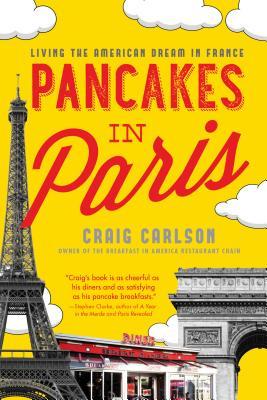 This book tells the story of how Craig Carlson, the owner of Breakfast in America, fell in love with the country and got the idea to open up an American diner in Paris. I read this after reading his second memoir, which was fantastic.

The first half of this memoir actually doesn’t take place in Paris, that much. There is the account of his junior year college stay in France, where he fell in love with the country, then after that is how he was able to find his way back there for a permanent stay. He had multiple career paths in his journey, none of which was in the restaurant business at all, so when he got the idea to open up an American diner in Paris of all places, it seemed out of the blue… but also felt right.

It was interesting to learn how difficult opening a restaurant can be, no matter where you open it (but especailly in a foreign country). Then there were the difficulties he had while operating his restaurant, which was mostly along the lines of employees and the French labor laws. It’s insane how hard it is to fire someone for not doing their job in France! While I commend the fact they require five weeks vacation time, maternity/paternity leave, and universal healthcare, I think it’s just wrong to have to pay someone for a job they stopped showing up to or did terrible at because they didn’t feel like doing a good job.

What I loved about this memoir (and his second one) was that he used genuine French phrases in his writing, and even gave the translation or a hint to what it means. There might have been some that I had to look up, but that’s how you learn… and I love the French language!

Overall, this was a great first memoir about falling in love with a country and learning how to run a business in France. The pacing was a bit slower for my liking, but it was still an interesting read and one that I will definitely recommend!

One thought on “Review: Pancakes in Paris”