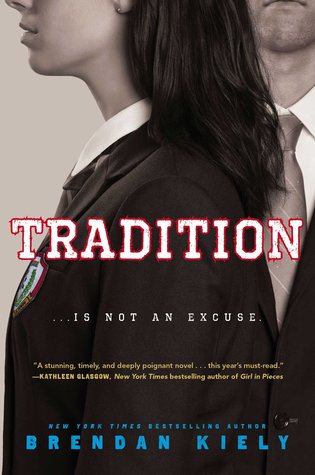 I’m usually all for boarding school novels, that’s why I picked this one up. Especially since there are students, Jules and new student Jamie, that want to just survive this year of school as well as expose the academy’s dirty secrets and traditions.

There are hints right away as to what some of the major ‘traditions’ are at Fullbrook Academy, which oozes with toxic masculinity across campus. The culture on campus basically normalizes treating girls like sex objects and even rape culture. It’s a subject that definitely needs to still be tackled in young adult fiction, and I applaud the author for doing so. While the topic was approached sensitively, I feel like the story still fell short.

The story is very slow paced and hard to stay interested. The real content of the story doesn’t even begin until at least halfway through the book, which leaves not as much time to develop the aftermath of what happens. There’s not much emotional depth to what happens with the character who was assaulted and honestly after something like that there should be more than what there was. For a little while there’s something, a mini-spiral of sorts, but I just feel like there would have been more given what was also being said on campus. Because of the slow pace and lack of emotional development, I didn’t really get too invested in the characters like I usually do, which made it hard to connect with them on any level.

I do like that they and their friends decide to stand up against the tradition of the Senior Send Off, even if it seemed a little soon after what happened. They take a stand against the privileged white males of the school to try to show them they can’t get away with it.

Again, I do admire the author tackling this topic as it’s so important and shouldn’t be ignored, but I feel like if the story had been at a quicker pace and there was more character depth, it would have been better and I personally would have been more invested.