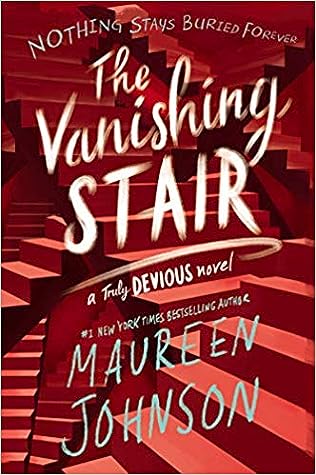 The Truly Devious case—an unsolved kidnapping and triple murder that rocked Ellingham Academy in 1936—has consumed Stevie for years. It’s the very reason she came to the academy. But then her classmate was murdered, and her parents quickly pull her out of school. For her safety, they say. She must move past this obsession with crime.

Stevie’s willing to do anything to get back to Ellingham, be back with her friends, and solve the Truly Devious case. Even if it means making a deal with the despicable Senator Edward King. And when Stevie finally returns, she also returns to David: the guy she kissed, and the guy who lied about his identity—Edward King’s son.

But larger issues are at play. Where did the murderer hide? What’s the meaning of the riddle Albert Ellingham left behind? And what, exactly, is at stake in the Truly Devious affair? The Ellingham case isn’t just a piece of history—it’s a live wire into the present. (Synopsis via Goodreads)

The mystery of the Truly Devious case thickens as Stevie Bell finds a clue that can change what they know about the letter and the kidnappers. Of course, she finds it in time to be sent back home to Pennsylvania with no hope of going back to Ellingham Academy. Or so she thinks.

Thanks to a powerful person whom Stevie despises, she gets what she wants and is able to return to Ellingham where she can finish her work on the unsolved case. Of course, she also has to catch up on her missed classwork and figure out what is going on with David, as well as what happened to Ellie when she ran off, but the case is her main concern.

We are introduced to some new characters in this one, including Dr. Fenton, her nephew Hunter, and Mudge, Dr. Fenton seems a little off the rails, but also knows her stuff when it comes to the Truly Devious case (she did write a book on it after all), and takes on Stevie as an assistant to help her do research for her next book. Hunter is just trying to get through college and take care of his aunt, and I was hoping Stevie would end up liking him over David, but that doesn’t seem to happen. Then there’s Mudge, who I wish there was more of because he’s a tall, mysterious, almost goth-looking dude that wears purple snake-eye contacts, but dreams of working at Disney as an Imagineer.

I loved this book just a little more than the first as it seems like the stakes are higher for Stevie – she has more to figure out, new clues that could possibly help her solve this case, a lost friend to find, and be able to keep herself at Ellingham by not failing her classes and keep her promise to the man that brought back. The pacing is better in this one as well and keeps you turning the page right up to the end! And the ending… all I can say is I was happy I had the next book available right away to start!

Once again, this book outdid its predecessor and I cannot wait to finish the final book of this trilogy and see what new secrets are revealed!