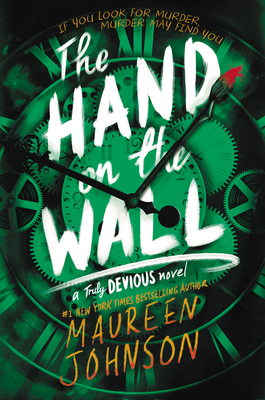 Ellingham Academy must be cursed. Three people are now dead. One, a victim of either a prank gone wrong or a murder. Another, dead by misadventure. And now, an accident in Burlington has claimed another life. All three in the wrong place at the wrong time. All at the exact moment of Stevie’s greatest triumph . . .

She knows who Truly Devious is. She’s solved it. The greatest case of the century.

At least, she thinks she has. With this latest tragedy, it’s hard to concentrate on the past. Not only has someone died in town, but David disappeared of his own free will and is up to something. Stevie is sure that somehow—somehow—all these things connect. The three deaths in the present. The deaths in the past. The missing Alice Ellingham and the missing David Eastman. Somewhere in this place of riddles and puzzles there must be answers.

Then another accident occurs as a massive storm heads toward Vermont. This is too much for the parents and administrators. Ellingham Academy is evacuated. Obviously, it’s time for Stevie to do something stupid. It’s time to stay on the mountain and face the storm—and a murderer.

After the realization that left Stevie swirling at the end of The Vanishing Stair, we find her back in class running on a sort-of autopilot. The problem she’s facing is that while she’s solved the case of the century, she needs proof and the final piece to the puzzle. And just as she’s close to figuring it out, the school has yet another student accident (no deaths this time) and they decide to send the students home… right before a major blizzard is about to hit Vermont.

Of course, that doesn’t stop Stevie and her friends from remaining on school grounds, and Stevie is more than glad for the plan that was set to keep them there. She has work to do, and she does it and does it well. She figures out who was behind the deaths of Hayes, Ellie, and Fenton and the person’s motivation for it.

Once again there is some dual timeline storytelling so we can see what did actually occur in the past compared to what Stevie is figuring out in the present. It was interesting how it would line up and it was fun to see Stevie put pieces together while knowing what did actually happen. No new characters are placed in this book, but we did get to see a little more of Stevie’s friends. I have to say that Janelle had one of the best parts when the two were tearing up Stevie’s room – she’s a friend that we all need in our lives! Nate too, I just love him and his snark. I’m still not a David fan and while I’m glad he did actually help Stevie in the end, I still don’t like him.

I’m happy with how the series ended and Stevie’s attitude about it all. The references made in the book to Agatha Christie’s famous detective, Hercule Poirot, made the series all that much better. And yes, Sherlock was obviously mentioned too, but I’m glad to see Agatha Christie get some recognition in a young-adult mystery series.

Overall, this was a great trilogy and it’s one that I’ll highly recommend to someone who’s looking for a mystery series to read!